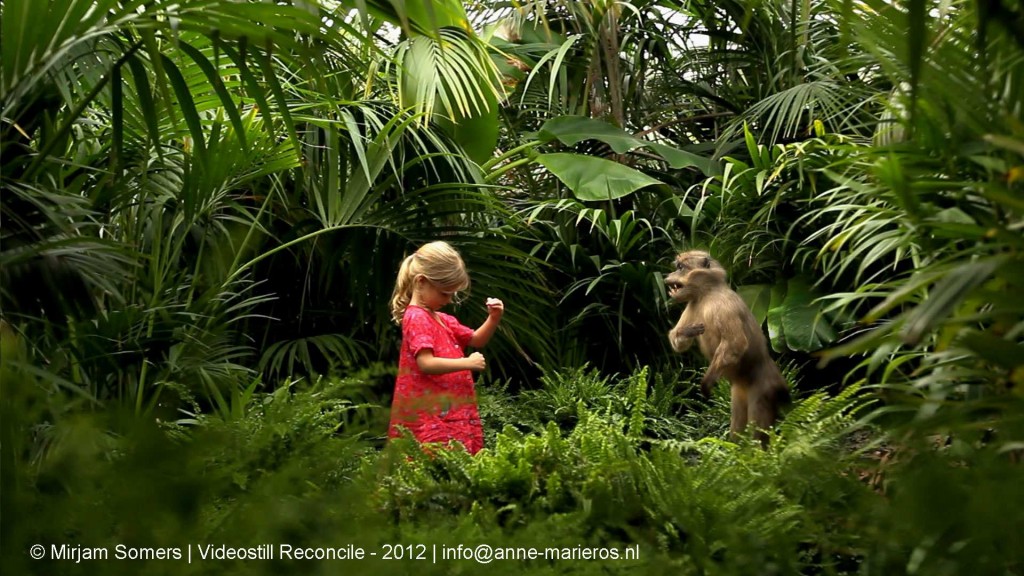 Lives and works in Rotterdam, NL

Video work
Mirjam Somers; ‘My work as a visual artist comprises video pieces and drawings. The complicated relationship between humans and animals is an important source of inspiration for my work. It is in this relationship to animals that ‘humanity’ becomes manifest in all its facets. In my current video work I translate this ‘humanity’, particularly the human wandering, into ominous situations in which humans and animals act out of powerlessness, automatism, habit, or on instinct. The horse, the monkey, the dog or crow find themselves together with a person or a wraith in a disturbing world and have no actual contact. They are caught up in repetition and make no progress. Passively, they do what they are ‘supposed’ to do and appear condemned to one another’s company, left in their mutual states of being. The sober image this produces is stripped of all ‘unnecessary’ elements and reduced to the essence. In most cases I use a single frame/shot, in which concentrated moments of calm, menace and release unfold. Due to the absence of montage and the single camera angle, my work refers more to painting than to video art. The works are akin to slow-moving, meditative paintings’.

Drawings
‘I make drawings in various sizes, with the same themes and complementary to my videos. In addition to the slow creative process of the videos, this direct way of working on paper is also an enrichment of my work’. 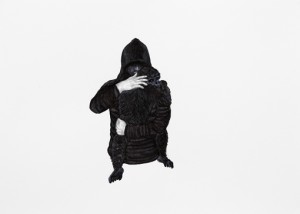 ‘The way that people relate to animals is often inconsistent because we are guided both by our reason and our emotions, our instincts and our cultural background; our view is clouded. The paradoxes in this relationship – animals as inferior, as food, as a tool, but also as equal or superior – have always been defining aspects in my reflections on humanity and identity.

With the establishment of, among other things, the Partij voor de Dieren (Party for the Animals), books such as Peter Singer’s ‘Animal Liberation’ – on ‘speciesism’ – and through developments in scientific research into intelligence in animals, a slight shift in the collective consciousness also appears noticeable.

The project ‘Complex Moral Universe’ will consist of a series of five autonomous video pieces, in which I zoom in on the many-sided and complex relationship between humans and animals. I make portraits of specific people and their animals, who, unlike in the work displayed in the group show 4 de Korenbeurs Schiedam and the group booth show in Manchester, do indeed make ‘progress’; they follow paths determined by individual choices and beliefs’.

2012
A tightly edited selection of Mirjam Somers new and recent works was part the booth groupshow ‘Peripheral Dialogue : this side of paradise‘ at the Manchester Contemporary 2012, September 27 – 30.

A tightly edited selection of Mirjam Somers works was presented by curator Anne-Marie Ros in 4 the Korenbeurs Schiedam. A summer group show curated by 4 guest curators presenting collectively a strong line up of national and international artists from June 30 – September 16 September, 2012 in Schiedam, NL